In a study sure to ruffle the feathers of the Global Warming cabal, Professor Richard Lindzen of MIT has published a paper which proves that IPCC models are overstating by 6 times, the relevance of CO2 in Earth�s Atmosphere. Dr. Lindzen has found that heat is radiated out in to space at a far higher rate than any modeling system to date can account for.

Editorial: The science is in. the scare is out. Recent papers and data give a complete picture of why the UN is wrong.

The pdf file located at the link above from the Science and Public Policy Institute has absolutely, convincingly, and irrefutably proven the theory of Anthropogenic Global Warming to be completely false.

Professor Richard Lindzen of MIT�s peer reviewed work states �we now know that the effect of CO2 on temperature is small, we know why it is small, and we know that it is having very little effect on the climate.�

�The global surface temperature record, which we update and publish every month, has shown no statistically-significant �global warming� for almost 15 years. Statistically-significant global cooling has now persisted for very nearly eight years. Even a strong el Nino � expected in the coming months � will be unlikely to reverse the cooling trend.

More significantly, the ARGO bathythermographs deployed throughout the world�s oceans since 2003 show that the top 400 fathoms of the oceans, where it is agreed between all parties that at least 80% of all heat caused by manmade �global warming� must accumulate, have been cooling over the past six years. That now prolonged ocean cooling is fatal to the �official� theory that �global warming� will happen on anything other than a minute scale.� | SPPI Monthly CO2 Report: July 2009

If for no other reason than this: the IPCC assumes that the concentration of CO2 in 2100 will be 836 ppmv (parts per million volume). However, current graphs based on real data show that CO2 concentrations will only be 570 ppmv in 2100, cutting the IPCC�s estimates in half right there.

Another nail in the coffin of Global Warming is the observed rate of temperature change from 1980, which is observed to be 1.5 degrees C per century. The IPCC modeling calls for a range of 2.4 to 5.3 degree increase per century, which is far above what is observed in real data collected between 1980 and 2009. The graph below clearly represents a far different reality as opposed to the predictions. 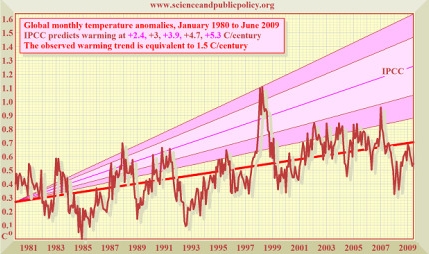 Not only is the IPCC basing its predictions on data that has been doubled from observed data, it is overstating the role of CO2 in Climate altogether. As the graph seen below shows, when charted for the years between 2002 and 2009, that solid red median line is going down, indicating global cooling. 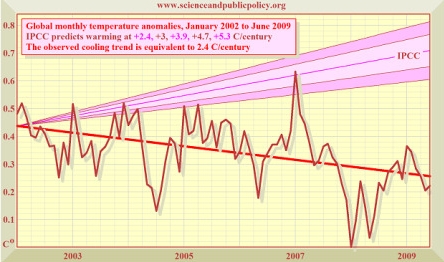 As significant as the above results are, it is not the Pi�ce de r�sistance. What is - the curious minded what to know? It is the ERBE results. The Earth Radiation Budget Experiment with 15 years worth of data. The ERBE result is absolutely devastating to the entire Global Warming Theory.

The following graph (Graph C) shows the ERBE results in the upper left hand corner, which is real recorded data, not a computer model. The 11 other graphs are the results from the models used by the UN and everyone else which state that more radiation should be held within Earth�s system, thereby causing warming of the climate. More simply put, the UN results illogically predict that as the oceans got warmer, the earth would simply hold more heat. The UN explains that it is CO2 which is holding this extra energy. This theory is not supportable by the simple fact that CO2 cannot hold that much heat, it is a very poor greenhouse gas compared with water. If anything, more clouds -water vapor- would conceivably hold the extra heat, but the corresponding rise in global temperatures this would cause have not been observed. This leaves only one conclusion, the Earth is radiating the extra heat into space, and this is supported by the data.

The ERBE results, which are factual data from real measurements made by satellite, show the exact opposite result from the UN/IPCC Projections (computer models which are not real data). As seas warm on earth, the earth releases more heat into space and the satellite results prove it. 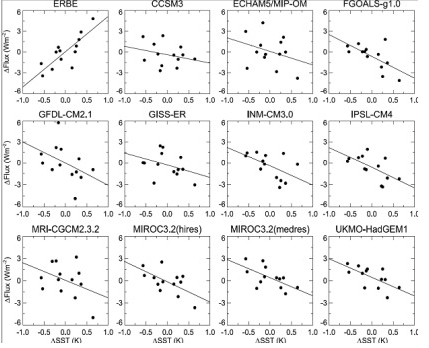 �The mismatch between reality and prediction is entirely clear. It is this astonishing graph that provides the final evidence that the UN has absurdly exaggerated the effect not only of CO2 but of all greenhouse gases on global mean surface temperature.� | Lindzen & Choi (2009).

For the sake of making the above graphs clear in their meanings, the term ?SST stands for Change in Sea Surface Temperature measured in Kelvin (A unit of temperature like to Celsius and Fahrenheit), and is a measurement of change in sea temperatures. A -1.0 number would indicate cooling, a zero reflects no temperature change, and a +1.0 would indicate an increase in temperature.

?Flux, The Vertical line in these graphs, measures the change in the amount of radiation released by the planet in the infra-red spectrum, heat in other words. From zero to +6 shows more heat radiated out into space. From zero to -6 shows less heat being radiated into space.

0 change in ?SST equals 0 change in ?Flux or no change. Less infra-red heat radiation going out into space should correlate to cooler sea surface temperatures, as there is less heat available to radiate out. More heat radiating out appears when sea surface temperature increases have occurred and more heat is available to radiate. Heat is radiated out into space as seas warm, and this overall maintains a climate equilibrium, This is proven by the ERBE graph in Graph C above as well as the other graphs presented in this article, which are based on observed data, not computer models. 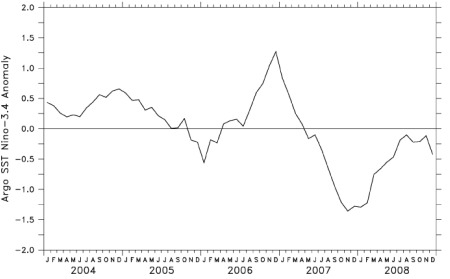 �The 3300 Argo bathythermograph buoys deployed throughout the world�s oceans since late in 2003 have shown a slight cooling of the oceans over the past five years, directly contrary to the official theory that any �global warming� not showing in the atmosphere would definitely show up in the first 400 fathoms of the world�s oceans, where at least 80% of any surplus heat would be stored.� | Source: ARGO project, June 2009.

All of this data leads to the conclusion that the UN/IPCC models are not only wrong, they are so far off the mark as to be laughable.  The satellite and bathythermograph data clearly do not match the IPCC theory, which means that the theory is incorrect.

What this data does tell us is if CO2 concentration should double, global temperatures will not rise by the devastating 6 degrees F the UN predicts, but by a completely harmless 1 degree F. The ERBE data shows an Earth system that is radiating more heat into space as sea surfaces warm, in other words a system at equilibrium, and is clearly demonstrated by observed data. The UN theory of Anthropogenic Global Warming is dead wrong.

The UN/IPCC have been using models that give a result that allow them to tell Nation States they must reduce and cap Carbon Emissions or the earth�s climate will warm by a devastating 6 degrees F. When in reality, more heat is simply radiated out into space as the ERBE OBSERVED DATA (Not a computer model) PROVES.

The United States House of Representatives has passed a Carbon tax (Cap and Trade) as have other governments in Europe, based on these completely erroneous models.

There are only a couple of conclusions to be made of this. Either the world has been misled by scientists working for the UN and IPCC due to faulty science, or faulty science has been deliberately used in a global scheme to generate tax revenues for the Governments instituting Cap and Trade Taxation policies.

Either way, the world has been the victim of some very bad science. The results of which can be seen in drastically reduced GDP in countries with the Cap and Trade laws in place, as well a a 5 - 10% decrease in standard of living for those citizens living there (Taxing Carbon designed to fail.), all with little or no effect on emissions globally.

Perhaps this will finally end the attempt by the Obama Administration as well as congress to tax a substance that trees need to survive, the very air we exhale thousands of times a day.

Thank you Professor Richard Lindzen, Dr. Ferenc M. Miskolczi, Dr. Mikl�s Z�goni, Dr. Mike Fox here in Oregon, and a great many other Scientists the world over, who decided to look at facts, instead of playing with models. Science is based on data, facts not theories. They took the facts, and let the theory write itself. The IPCC took theories and tried to cherry pick only the details that fit, and in the end failed to do even that.

Public policies should also be based on facts, not on unproven and in the end disproven theories. The United States and indeed the world is in the debt of these and other scientists, who relied on data and facts to describe our world and its climate! We are in their debt!

For more info: Science and Public Policy Institute, Editorial: The science is in. the scare is out. Recent papers and data give a complete picture of why the UN is wrong. Climate change? Not so fast say Scientists, Have it your way - Global warming is baloney, Einstein-like breakthrough in Climate Science (Part 1), Einstein-like breakthrough in Climate Science (Part 2), Oregon legislature plays Cap-n-Trade shell game, Democrats say Cap and Trade is a big tax, Taxing Carbon designed to fail