The Greatest Change in the History of Europe

You might not hear about this book much in the next month, nor even in the next year, but it will affect your life in some way, and that of our country and continent.

Christopher Caldwell is a mild-mannered Financial Times journalist who over the past decade has covered continental Europe (France especially) and its relationship with Islam in particular.

That Caldwell is so mainstream, well-respected and analytical makes his conclusion all the more devastating - that the mass migration of Africans and Asians into Europe since the Second World War was an unprecedented, economically unnecessary and ill-thought-out plan that has had a profoundly negative impact on our way of life.

Furthermore, he says, the mass importation of Muslims at a time when Europe has lost its own faith and Islam has developed a dangerous and powerful radicalism threatens the very freedom of Europe.

In 1970 he was again scorned for suggesting that Wolverhampton, Birmingham and Inner London would be between a fifth and a quarter non-white by the turn of the century. The figures were 22.2 per cent, 29.6 per cent and 34.4 per cent and rising.

But Powell's predictions of "rivers of blood" turned out to be inaccurate so far because he was out of step; the Tory MP was a passionate believer in the British Empire, while most of his political contemporaries were riddled with liberal white guilt over colonialism and the Holocaust.

Such self-loathing was at the heart of the immigration experiment and later experiments in multiculturalism and political correctness; only a society so racked with self-hatred would have invited foreign labour in such numbers despite the economic benefits being so thin. The economic benefits in the long term, Caldwell argues, have been "puny" and short-term, while the social effects are profound and permanent.

Most of the new immigrants, such as Pakistanis in Yorkshire and Turks in the Ruhr valley, were actually recruited into industries that were already on their last legs, and most immigrant groups took and still take more out of their exchequer then they pay in.

For the indigenous European poor, in particular, immigration has made life harder, but for everyone it brings challenges ("challenges" being a euphemism for problems).

Illegal immigration is handy because illegal immigrants do the jobs no one else wants to, keeping down inflation and labour costs, so allowing Europeans to work 30 hours a week and retire at 55.

The problem is that soon these new immigrants tire of doing the dirty work and new recruits are needed to keep an ever larger number of retirees and other state dependants in villas.

It is a gigantic Ponzi scheme - play today, pay tomorrow - and Europe is starting to pay now, financially and socially. The integration of Pakistanis, Algerians, Moroccans and Turks into England, France, Holland and Germany has been made a lot harder by the rapid and widespread decline of Christianity.

One of the side-effects is the collapse in the European birth rate: Austria is becoming Islamic not because Muslims are having too many children - their birth rate of 2.34 per woman is very close to the optimum - but because atheism is killing the country. Among Austrians who call themselves Catholics, which includes a majority of non-churchgoers and other nominal Christians, the birth rate is 1.32; among those who profess atheism it is 0.86. It is the same everywhere - in Brussels the seven most common boys' names are Mohamed, Adam, Rayan, Ayoub, Mehdi, Amine and Hamza. Leicester and Birmingham will soon be Britain's first-ever majority non-white cities.

And yet the elites have been in total denial about the growth of a Muslim body, arguing that to do so ignores diversity among these communities - which Caldwell compares to denying there is such a thing as a car because Volvos and Volkswagens are different.

As well as growing in size every year, this Muslim population is dis-integrating from the European mainstream; children in German Muslim schools learns six hours of Arabic a day and one of German; in England the veil has become a widespread sight; a British brigade fought in Iraq for al-Qaeda; and Muslim "nationalism" in France has led to the creation of suburban ghettos far worse than anyone realises.

Caldwell compares the French ghetto film L'Haine, which portrayed a mixed Jewish and Arab gang, to West Side Story in its realism.

That simply would not happen in a Muslim suburb. The ironic end result of this post-Holocaust guilt is a surge in anti-Semitism at the end of the century, and a Muslim bloc that has pushed Europe in an increasingly anti-Israeli and anti-Semitic direction. Norway threatened to boycott Israeli goods at the same time as Norwegians were being attacked in Gaza over the Mohammed cartoon affair. In France there were black African gangs like Tribu Ka, who roamed around Jewish areas like a "postmodern Freikorps".

The collapse of Christianity, and the introduction of novel morals such as the belief in sexual freedom and gay equality, totally at odds with both Muslim culture and European culture of only half a century ago, has made conflict between Europe and the new Europeans even harder. That is why surveys consistently show Muslims and non-Muslims thinking the other side are "disrespectful" to women, or why a large minority of young British Muslims advocate the death penalty for apostasy or homosexuality.

Can Europe be the same? Clearly not. Can we reach some happy compromise that peacefully integrates such large communities and avoids the conflicts that have plagued such multi-cultural countries in the past? Probably not.

Pim Fortuyn in Holland offered the best hope of a non-racist, liberal Europe that believed in itself; after his murder the future lies either with Nicolas Sarkozy, who believes in republican integration, or the likes of Geert Wilders, whose implacable hostility to Islam is increasingly shared across Europe.

This is a fascinating, earth-shattering account of the most radical change in European history. 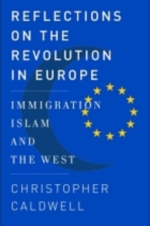 Reflections on the Revolution in Europe
by Christopher Caldwell