In the wake of the sensational ACORN video sting operation by two young investigators, an even more daring and devastating undercover investigation � this one infiltrating the nation's most aggressive Muslim "civil rights" organization for six months � has produced stunning revelations about the supposedly "moderate" group, backed up by 12,000 pages of documents obtained during the secret op.

As revealed in a new book detailing the operation and its findings, the Washington, D.C.-based Council on American-Islamic Relations, or CAIR, is not the beneficent Muslim civil-rights group it claims to be. Indisputable evidence now shows CAIR and other "mainstream" Islamic groups are acting as fronts for a well-funded conspiracy of the Muslim Brotherhood � the parent of al-Qaida and Hamas � to infiltrate and destroy the American system.

Until now, CAIR has remained a powerful force in the nation's capital and across the country, from demanding the Obama administration stop FBI counter-terrorism tactics to compelling a school district to apologize to Muslims.

That influence, many believe, may be coming to an end, as a result of the undercover investigation � which included the son of a veteran counter-terrorism investigator, who grew a beard and converted to Islam, as well as two veiled female interns.

"Muslim Mafia: Inside the Secret Underworld That's Conspiring to Islamize America," a WND Books publication by counter-terrorism investigator P. David Gaubatz and "Infiltration" author Paul Sperry, documents CAIR's ultimate purpose to transform the United States into an Islamic nation under the authority of the Quran. The book already has prompted action on Capitol Hill.

With evidence from "Muslim Mafia" in hand, U.S. Rep. Sue Myrick, R-N.C., co-founder of the Congressional Anti-Terror Caucus, and other members of Congress � including Reps. John Shadegg, R-Ariz., and Paul Broun, R-Ga. � plan to hold a press conference today in Washington calling for an investigation and an end to political lobbying by front groups such as CAIR.

"Now we have proof � from the secret documents that this investigative team has uncovered, coupled with the ones recently declassified by the FBI � that [radical Islamists] agents living among us have a plan in place, and they are successfully carrying out that subversive plan," Myrick writes in the foreword to "Muslim Mafia."

Noting that CAIR has tried to hide its strategy, finances, membership, internal disputes and much more from public view since its founding in 1994, Islam expert Daniel Pipes lauded "Muslim Mafia" for definitively exposing the "tawdry and possibly illegal inner workings of radical Islam's most aggressive organization in North America."

"The revelations in this book should both put CAIR out of business and permanently discredit the Islamist cause," Pipes said.

The book begins as a real-life, heart-pounding thriller, with Chris Gaubatz, the son of co-author David Gaubatz, preparing to go underground as an intern for CAIR at its Herndon, Va., office.

Astoundingly, the younger Gaubatz, posing as a bearded Muslim convert, ends up with a position at CAIR's national office in Washington, just three blocks from the U.S. Capitol building, working alongside top leaders Ibrahim Hooper, Nihad Awad and Corey Saylor.

Along with declassified government documents, the book unveils thousands of e-mails, faxes and internal memos that were never meant for public viewing.

The new evidence shows that CAIR � already designated an unindicted co-conspirator in the largest terror-financing case in U.S. history � is part of an organized crime network in America made up of more than 100 other Muslim front groups that collectively comprise the U.S. Muslim Brotherhood.

"Muslim Mafia" also exposes the inner workings of the mob-like Brotherhood and explains its broader conspiracy of infiltrating the American government and "destroying Western civilization from within."

"The evidence found in the investigation is incontrovertible," said co-author Sperry, noting that the book has more than 40 pages of footnotes and an appendix with more than 50 pages of exclusive confidential documents.

The Brotherhood is known within Islamist circles as the "Ikhwan mafia" because of its highly organized structure, centralized control and covert operations. CAIR, reveals "Muslim Mafia," is one part of the network of front groups, cut-outs and shell companies that shield the Brotherhood's criminal activities from authorities.

"These guys talk about jihad and murdering Jews like the mob talked about killing � totally casual, like they were ordering pizza," said one FBI official in Washington quoted in the book.

Some key smoking-gun revelations detailed in "Muslim Mafia" include:

The authors explain they targeted CAIR because it helps control the "religious crime syndicate from its power base in Washington, the capitol of the same government it wishes to overthrow."

While the FBI has cut formal ties to CAIR in the wake of its designation as an unindicted co-conspirator in a plot to fund the Palestinian terrorist group Hamas, the group has virtually unfettered access to Capitol Hill and continues to wield influence in the White House.

The first Muslim elected to Congress and a de facto CAIR board member, Ellison predicted in one CAIR power breakfast he soon would be flanked by 15 other Muslim congressmen, "Muslim Mafia" notes.

Chris Gaubatz, in fact, once found himself praying elbow-to-elbow with Ellison during a Friday prayer gathering attended by CAIR inside the U.S. Capitol.

House Speaker Nancy Pelosi, D-Calif., the book says, is totally in the dark about the threat, and so is the White House. 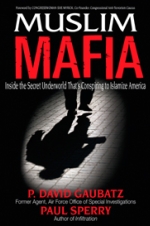 In fact, reveals "Muslim Mafia," in the White House President Obama is hiring Muslims � including an adviser who advocates compliance with Shariah law � based on resumes solicited from Muslim Brotherhood fronts.

Meanwhile, the FBI is in conflict internally about how to deal with the Brotherhood, with some top officials in favor of maintaining outreach, while counter-terror case agents in the field strongly object, pointing to evidence the network is a factory for homegrown terror and is secretly carrying out activities hostile to the U.S.

Until recently, the FBI engaged in outreach activities with CAIR, including forcing rookie agents to take cultural field trips to area mosques.

The "Muslim Mafia" authors obtained notes revealing the FBI even has offered to sponsor Muslim youth camps with the Boys Clubs of America.

A shortage of Arab linguists and dozens of discrimination suits by Arab and Muslim employees has prompted the FBI to recruit from Brotherhood-related groups, such as the Islamic Society of North America

A Muslim agent who drew national attention when he refused to tape-record a fellow Muslim during a terrorism investigation was promoted and now recruits other Muslims to become agents and linguists.

The book also presents evidence CAIR has prepared "hit sheets" on its critics in the news media in an effort to intimidate them into silence.

Internal memos show, for example, top officials privately met with CNN executives in Atlanta to press them to cancel Glenn Beck's program on its Headline News network. Beck now has a highly rated afternoon show on the Fox News Channel.

CAIR's campaign to boycott leading nationally syndicated radio talk-show host Michael Savage's advertisers cost more than $160,000, the book reveals. The authors recount how CAIR ran out of money before it could crack Savage's most loyal sponsors.

The book also includes new revelations about CAIR's role in the "flying imams" case in 2006 in which six Muslim leaders were removed from an airline flight in Minneapolis after passengers and crew members reported what they believed to be suspicious behavior.

Gaubatz is a veteran federal investigator and counter-terrorism specialist who served for more than a decade as a special agent in the U.S. Air Force's elite Office of Special Investigations. He held the U.S. government's highest security clearances, including Top Secret/SCI (Sensitive Compartmented Information), and was briefed in many so-called black projects.

Gaubatz also is a State Department-trained Arabic linguist with more than two decades of experience in the Middle East, including tours in Saudi Arabia, Kuwait, Jordan and Iraq. In 2003, he led a 15-man team to rescue the family members of the Iraqi lawyer credited with saving Army Private First Class Jessica Lynch.

His bestseller "Infiltration: How Muslim Spies and Subversives Have Penetrated Washington" is being used by the U.S. military and top law enforcement departments nationwide. Many of the numerous stories he has broken on national security and counter-terrorism have been cited by the Washington Post, USA Today, UPI and the Associated Press, among others. His columns have appeared in publications such as the New York Times, Wall Street Journal, New York Post, Houston Chronicle, American Spectator and Reason.

One FBI official quoted in "Muslim Mafia" says CAIR and the other Muslim Brotherhood front groups differ from al-Qaida in that, while all share the same goals, they use different methods to achieve them.

"The only difference between the guys in the suits and the guys with the AK-47s is timing and tactics," the official explained.